I would agree that this guy is a real narcissist and given the state of the TTC there may also be a causal closeness to being incompetent but then so is his paramour also a glamour fan who now gets her fifteen minutes of fame. Gosh maybe she will be centerfold of the month somewhere! 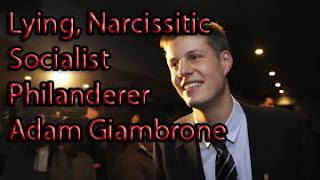 Wente rants on about men having a fling and some are pretty dumb but with all these relationships there is a willing woman involved. The women involved with Tiger all knew he was married. What does that say about them. Does Bimbo come to mind?

You do cross the line at encouraging violence with a frying pan weapon which could kill. Even dorky drone eunuchs don't deserve that. Was it OK for Tiger's wife to beat him on the head with a golf club? If so the reverse must also be true as well when the innocent little woman gets her nookie on the side. After all studies do show that women cheat as much as men. They are, as is the norm, much more manipulating and discreet at keeping it on the QT, especially if they are already gold digging with someone else with bucks. 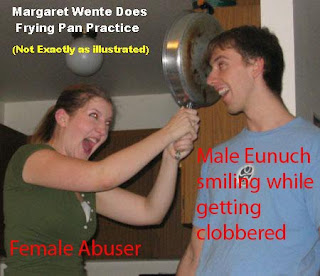 Is Wente suggesting we open the doors to all genders taking vigilante justice on their cheating partners?

I hope not as that would not be responsible journalism and we know she is responsible?

The bottom line is Ms. Wente you are bashing men today but there was a less than innocent woman involved in all of your quoted extra sexual excursions. Those who got paid were doing it because it was their job but what about the motives of the other women?MJM

Being bad in Toronto the Good 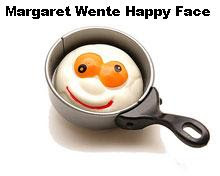 Toronto city politics are hardly scintillating at the best of times. So we owe a vote of thanks to Adam Giambrone, the brash young mayoral candidate who turned out to be too hot for politics. His was a textbook case of self-immolation. First, he doused himself with gasoline, and then he lit the match. By Wednesday, nothing was left but a greasy smudge on the floor of the council chamber.

When confronted by Ms. Lucas's tale, Mr. Giambrone, who is 32 but looks lots younger, made his second goof. He pretended to confess, but lied. He admitted to a “relationship” that was “inappropriate” and a “serious lapse in judgment,” but he claimed it had never involved sex and they had met only in “public places.” Perhaps he had forgotten that message he had sent telling Ms. Lucas she looked good naked. (Of course, she kept it.)

She also kept the one in which he described his long-suffering girlfriend, Sarah McQuarrie, as nothing but a prop for his mayoral bid. “You know I will be announcing I have a partner,” he wrote. “It is important for the campaign … I had to have someone political.”

“ You can forgive a guy for cheating. You can't forgive him for being a total cad.”

That was the last straw. You can forgive a guy for cheating. You can't forgive him for being a total cad.
It turns out Ms. Lucas isn't the only other woman Mr. Giambrone had text with. By Wednesday he had confessed to multiple affairs, and tearfully threw in the towel.

“I don't think there are many males in this city who could afford to have their hormones closely examined,” one city councillor said.

Well, that's not news. Even Mel Lastman, a truly bad but amiable mayor who provided much comic relief in his day, turned out to have had a secret affair.

What amazes me about these people is why they think they won't get caught – especially in a tell-all age when every contact leaves a digital trail.

Did Eliot Spitzer really think his encounters with expensive hookers (after a career of busting prostitution rings) would go forever undetected? Did John Edwards really figure he could keep his flaky girlfriend and their love child a secret while running for the most public job in the world? Did Mr. Giambrone never fret that Ms. Lucas (an aspiring actress, we are told) might get the least bit miffed when he broke the news to her (by text) that he was not living with his family (the excuse he gave for his failure to invite her home), but with another woman? Or that she might enjoy having her assets splashed all over Page 1?

My guess is that such men don't think about these things at all. They are such extreme narcissists (a helpful trait in politics) that no one is ever quite as real to them as they are to themselves. That includes their wives, their children and all the people who have busted their tails on their behalf. 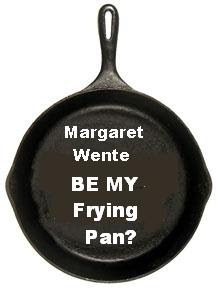 Sadly, this may be the high point of our mayoral race. Mr. Giambrone's exit leaves behind three middle-aged white guys, one of whom is married to another man. Naturally that's not an issue around here, unless he's having text with other people on the sly.

Mr. Giambrone, who looked genuinely shattered at his press conference Wednesday, is even attracting a bit of sympathy (though not from me) and his long-suffering girlfriend is standing by him.

I desperately hope that one of these days some humiliated spouse will whack the guy with a frying pan. I'd give good money to see that.