The Politics of Domestic Violence

The feminist-driven “domestic violence industry” is part of an ever-expanding, tax-funded “bureaucracy of compassion” with its attendant caregivers, social workers, regulators, intellectuals and social scientists.

Its use of the term “domestic violence” rather than the more gender-neutral “relationship violence” is based on the Marxist analysis of gender relations penned by Marx’s collaborator Friedrich Engels which presupposes a male 'oppressor' ("Within the family, man is the bourgeoisie, woman and children the proletariat") and a female ‘victim.’

Feminists with a strong emotional investment in the presumption of an oppressive patriarchy base their assessment of men as “the violent sex” on police, court, hospital and refuge data while waving away numerous academic studies implicating both sexes equally in relationship violence. These seriously troubled sisters will cite police blotter statistics and other official data to falsely conclude that relationship violence is a male problem ("That’s just part of how 'they' treat 'us' as women").

There are a number of compelling reasons why a man might be reluctant to complain to authorities that his wife assaulted him. These include fear of ridicule or being disbelieved; threats that if police are called his wife will level a counter-accusation and he'll be the one arrested by an establishment predisposed to take her part; a reluctance to walk out of the home that he probably paid for; the likelihood that access to his children will be denied by a gender-biased Family Court should he leave to escape the violence; and fears for the children's physical safety if he's no longer around to protect them from a violent mother.

One of the saddest accounts of male victimisation by a violent female was that of an army drill sergeant in the United States, who placed his gun in his mouth at the dinner table and blew his brains out in front of his family, after the contrast between his macho parade ground persona and the reality of his miserable existence became too much to bear.

New Zealand has a network of Women’s Refuges but not a single Man’s Refuge. And if a man did show up at a Women’s Refuge seeking relief from a violent female partner, do you think he’d be admitted? Like police blotter statistics, “refuge data” clearly have significant limitations in terms of providing an accurate picture of relationship violence in our community.

US researcher, Dr Martin Fiebert has examined 155 scholarly investigations, 126 empirical studies and 29 reviews and/or analyses in concluding that women are as physically aggressive, or more aggressive, than men in their relationships with their spouses or male partners. The aggregate sample size in the reviewed studies exceeds 116,000 and can safely be regarded as statistically robust. Fiebert’s annotated bibliography, first published in Sexuality and Culture Volume 8, Number 3-4, Summer-Fall 2004, can be viewed online at http://www.csulb.edu/~mfiebert/assault.htm.

Contrary to the demonstrably false feminist picture of relationship violence, men and women are implicated in relationship violence in approximately equal numbers at all levels of severity as assessed by a standardised "Conflict Tactics Scale.” Both sexes are more or less equally represented in every category from throwing a teaspoon all the way up to murder. In some categories (e.g. punched, kicked, hit or slapped one's partner), female involvement slightly outstripped that of males.

Approximately one third of violent incidents were found to be "he assaults her," one third "she assaults him," and one third "they assault each other.” Most of what is categorised as "relationship violence" was found to be occasional, low level, and didn't result in serious injury, i.e. shoving, pulling, slapping, throwing small objects etc.

British family care activist, Erin Pizzey, who set up the first Women's Refuge in England in 1971, had a well-publicised falling out with the Sisterhood after she wrote a book claiming that many women presenting at her Chiswick Women's Refuge were "at least as violent as the men they had left behind" and self-admittedly addicted to the adrenalin rush they got from provoking violent reactions in their male partners, though few enjoyed the violence itself. These women were repeatedly and often seriously verbally and physically violent both to their own children and to other women in the shelter.

The foregoing analysis demonstrates conclusively that relationship violence is in fact a human problem, not a gender issue as the feminist movement would have us believe. The time is long past for society to acknowledge the female contribution to such violence rather than simply blaming males for something women are, on all the evidence, equally involved in.
Posted by Michael J. Murphy at 8:13 PM No comments: Links to this post

Just in...Tomorrow the House Judiciary Committee will be hearing HB 3402 for Shared Parenting in Oregon. The hearing is at the Oregon State Capitol Room 357 beginning at noon. Please attend and show your support. The proposed law defines joint legal and physical custody as presumptively in the best interest of the child. The bill declares relocation not in the child's best interest and penalizes parents for access interference. Click here to read the bill.

MP Maurice Vellacott sent this announcement late last week. Thanks to our friends and counterparts at the Canadian Equal Parenting Council for supplying the poll numbers. Click here for the poll. It's obvious the public 'gets it' when it comes to Shared Parenting. Our task is to turn these sentiments into reality.

OTTAWA Member of Parliament Maurice Vellacott (Saskatoon-Wanuskewin) today announced the results of a new poll on Equal Parenting after divorce.

"The results indicate that four out of five Canadians (80 percent) continue to support equal shared parenting after divorce with almost no difference by gender, region, age group, or party affiliation," said Maurice Vellacott. “This poll was commissioned in conjunction with the work I've been doing to advance Equal Parenting through Private Member's Motions and Bills,” Vellacott added.

The results are nearly identical to a survey conducted in 2007, and are part of a long term trend indicating continuing high levels of support for equal parenting.

Conducted by Nanos Research during March, 2009, the question asked survey participants was: “Do you strongly support, somewhat support, somewhat oppose or strongly oppose federal and provincial legislation to create a presumption of equal parenting in child custody cases?" The statistical margin of accuracy is 3%, 19 times out of 20.

"The response I received to this motion has encouraged me to proceed with the poll and the drafting of a Private Member’s Bill in this session with a view to garnering all-party support for Equal Parenting, Vellacott said.

Poll results indicate that supporters of all Parties in the House of Commons are united in their support for Equal Parenting, ranging from a low of 76 percent for NDP voters to a high of 83 percent for the Bloc.

Recalling the popular support for the 1998 “For the Sake of the Children” report, Mr. Vellacott noted that there has historically been broad political support across party lines. Canadians have long called for this; and countries such as Australia, Belgium, Sweden, Denmark, and many US states have proceeded along these lines.

Mr. Vellacott has been working with members of the extended divorce community to develop amendments to the Divorce Act. "The divorce community are the real experts in this field as they have first-hand experience with the strengths and weaknesses of the current legislation," he said. “The proposed amendments won’t solve all problems, but they will certainly address a major point of contention in divorce," he advised.

Equal Parenting calls for continuation of parental rights, and obligations with joint legal responsibility and joint physical custody, with the presumption that equal parenting time is the best interest of the child.

You may recall last July Parade Magazine polled readers asking: "Should Divorced Dads Have Equal Time with Their Kids?" See the results here.

These and other examples demonstrate Shared Parenting is the next family law reform.

Your Washington DC based Shared Parenting and family law reform organization. Please support these efforts with a contribution by clicking here.

Posted by Michael J. Murphy at 6:49 PM No comments: Links to this post 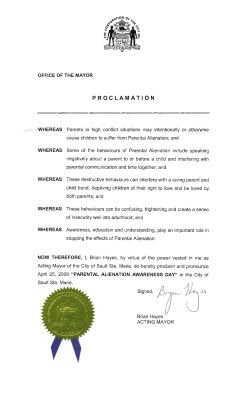 The City of Sault Ste. Marie has proclaimed April 25, 2009 as the 4th Annual Parental Alienation Day as shown below. This year 15 countries are participating as well as cities and states within these countries. Parental Alienation (PA) can cause children emotional problems ranging from mild trauma to severe psychological tribulations. Pamela Richardson, a Canadian mother, authored the book "A Kidnapped Mind", detailing her ordeal and the subsequent suicide of her son Dash. More recently a mother in Toronto killed her 18 month old toddler son, Jayden Bernard, to prevent the father from seeing him. This is the most extreme kind of PA possible.

PA is prevalent in our community with past court cases in the public record involving it and current activity before the Family Court where it has been used against target parents to get a "leg up" in custody battles. Family Courts in Canada are starting to recognize the seriousness of the manipulation of young children and are reversing custody as a result.

I have discussed this emotional abuse of children with the Algoma Children's Aid Society (ACAS) over the past 4 years and they can do little to combat it. They cannot see the psychic bruising and it is outside of their current protective mandate. The Family Preservation Program operated by the ACAS does do its best with highly motivated dedicated staff.

With awareness we can educate to create understanding and through understanding legislative changes can be made to create environments reducing the conflict which creates this behaviour. One of the first must be changes to the divorce act making shared and equal parenting a rebuttable presumption for fit parents. Those who daily supervise or provide mental health services for children will be better equipped to recognize why children exhibit certain responses.

WHEREAS Parents in high conflict situations may intentionally or otherwise cause children to suffer from Parental Alienation; and

WHEREAS Some of the behaviours of Parental Alienation include speaking negatively about a parent to or before a child and interfering with parental communication and time together; and

WHEREAS These destructive behaviours can interfere with a loving parent and child bond, depriving children of their right to love and be loved by both parents; and

WHEREAS These behaviours can be confusing, frightening and create a sense of insecurity well into adulthood; and

WHEREAS Awareness, education and understanding, play an important role in stopping the effects of Parental Alienation:

Posted by Michael J. Murphy at 5:43 PM No comments: Links to this post