The Feminists in Quebec, aided by your taxpayers dollars supplied through Status of Women Canada and Quebec's own Provincial Government are not unlike feminists organized every where tax dollars are available. They malign, impugn, and lie about maleness and masculinity and don't care how they destroy men and boys. Their mythological victim status is all that matters. Did you know testosterone is not found to be causally linked to male aggression? I thought not. 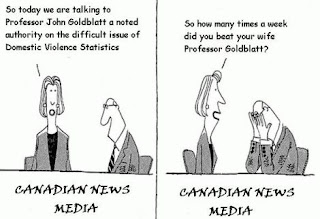 They want the public at large to believe that masculinity is a malignant curse on society and everyone would be better off if all were feminized. In the 20-30 age group of Ontario's teachers females outnumber males over 4-1. In elementary levels it is higher. Boys, who in 90% of divorces, are in the physical custody of mom, seldom see a male role model through their emotional growth as dads are marginalized and cast off as visitors. Most, if lucky , see their children 14% of the time.
Feminist spin is demagoguery and propaganda at its worst. They learned well from those, of the past, who used propaganda to destroy whole ethnic groups.  It matters not that single moms are the sole largest perpetrators of child neglect, abuse and homicide. It matters not females are shown to be in large studies 70% most likely to initiate intimate partner violence in non-reciprocal situations, and DV is pretty much equal between genders.  (Search this blog or better yet this one for the real truth).  The MSM and the public at large, having being subject to the propaganda for over 30 years believe the nonsense. Mendacity has never deterred a feminist.
Women’s Shelters are found throughout Canada. There are an estimated 550 to 569 of them across the land and they are represented in every province and territory.
Canada’s Budget to keep these shelters operational is $377 million annually (Stascan 2005-2006)
Stats Can states  In 2008 the percentage of abused women reporting domestic violence by male partner = 8%
In 2008 percentage of abused men reporting domestic violence by female partner = 7 %
Number of Shelters for abused Men in Canada = 1 (privately run. In Calgary, Alberta)
Canada’s budget for men’s shelters = $ 0

Whenever you see a feminist use the term women and "children" (the latter of whom are abused more often by females in domestic situations) you have found a Life Boat Feminist (LFB) (see the right side bar here for definitions).

Thanks to Barbara Kay for helping to highlight the myths of feminist dogma. To suggest (by me) this idolatry of the feminine borders on religious zealotry is not far off the mark.

For example, how long does your female partner spend getting ready to go some where compared to you? How many different products does she use to prepare for a day or night out?  Do you think there is a  healthy market for these products? Who do you think marketers target with respect to shopping. Why do you think they don't care about men unless it is to buy a pickup or watch sports?MJM

“A bad statistic,” says sociologist Joel Best, “is harder to kill than a vampire.” Bad statistics come from bad intellectual faith. And in no field does bad intellectual faith run more rampant than that of domestic violence.
In an up-to-date example of the phenomenon, we find the “World Soccer Abuse Nightmare” out of England, in which the British Home Office carelessly endorsed a bogus study put forward by England’s Association of Chief Police Officers, purporting to find that a full 30 per cent increase in domestic violence (DV) during the World Cup. A subsequent investigation by reliable scholars found the so-called study to be riddled with errors and corrupt methodology. 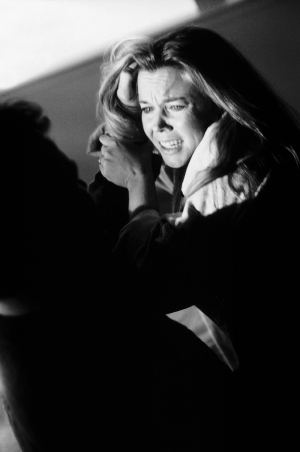 The World Cup stats fiasco recalls the 1993 Super Bowl hoax, when it was “reported” that DV escalated by 40 per cent during the game, a falsity that tore through the media like wildfire, to the point that the Super Bowl was hyped by NBC as the “abuse bowl.” Only a single Washington Post reporter tracked the figure to its source in a casual remark at a press conference by an irresponsible feminist activist. It was completely bogus, but the pernicious rumour circulates every year, despite 17 years of statistical tracking that reveals the same constant message: There is no substantiation whatsoever to any sports-DV linkage.

Here in Quebec, we have our own equally persistent scandalous version of this hoax. In 1980, a false statistic was promoted by a supposedly scholarly study (Macleod et Cadieux, 1980, later conceded to be based on false statistics), to the effect that one Canadian woman in ten is beaten by her husband or live-in partner.

The unkillable “vampire” morphed into another false statistic circulated by the Minister of Social Affairs. Now, the message was that there are 300,000 victims of DV in Quebec each year. Anyone with common sense, thinking of the enormity of this charge, would realize this was an astronomical figure and highly suspect in a population of at most 8 million people – far less when you subtract the men, the very young and the elderly.

But strategically it made sense for political militants to fear-monger amongst Quebec women in order to pave the way for social changes feminists were demanding. In 2008, Quebec upped the ante in the fear-mongering game by flooding the province with print, radio and TV ads claiming that “one in three” Quebec women would be a victim of DV in her lifetime, another patent falsehood (it’s more like a lifetime risk of one in 14, which doesn’t take into account the obvious spread of the risk: A probable zero likelihood for most prudent women and the probable 90 per cent risk for prostitutes and drug addicts).

That one-in-three “statistic” was based not in research, but in an opinion poll asking women what their perception was of their risk for DV. Moreover, they included in their definition of DV such trivialities as insults, the way men looked at them and any number of subjective categories all supposedly part of a spectrum of abuse. No attempt whatsoever was made to gauge how much abuse is perpetrated against boys and men by women, even though the numbers of such sexual and physical assaults is significant.

How such a demonization of all males might affect actual boys and men psychologically, or how it might affect society’s perception of sons, brothers, fathers and husbands never came under consideration.
For an in-depth exploration of the phenomenon – that is, the whole phenomenon of the demonization of the male sex, of which false statistics are but the tip of a treacherous iceberg – I recommend a recently published anthology of essays, 300,000 Femmes Battues: y avez-vous cru? Full disclosure: I wrote the preface to it.
The book brings together Quebec’s leading researchers and “good faith” intellectuals on the subject of feminism’s crusade against men, each one expanding on the effects of radical feminism in his or her own field. The problem is approached from all sides: philosophical (François Brooks); juridical (Georges Dupuy); political (researchers Jean-Claude Boucher and Jean-Pierre Gagnon); familial (Lise Bilodeau); media (Bob Lérétik); and historic (Jean-Philippe Trottier).

Feminists in Quebec are far better organized for political action in Quebec, because women politicians, for historic reasons having to do with the Quiet Revolution, have been at their game longer and with greater focus than their sisters in the ROC. Their influence is widespread and deep and in many ways corrupt as a result of too much political power concentrated in the hands with those of a monolithic view of society that excludes men’s rights, and increasingly fewer scruples in whatever methods it takes to further the interests of women.
Meanwhile, boys are dropping out of school like flies, Quebec male suicide numbers are alarmingly high, and sexually abused boys and men have nowhere to turn for help. But escalating millions upon millions of public dollars are lavished on women’s problems, real and imagined.

The abandonment of boys and men in Quebec is an orphan topic that deserves a little more media gruel. This is the first credible book to gather all the topic’s important background and relevant information in one volume. It won’t get the attention it deserves, alas, but that it exists at all is a hopeful sign that intellectual good faith on this thorny subject may yet have its day in the court of public opinion, so long dominated by the feminist movement’s merchants of duplicity.

Posted by Michael J. Murphy at 11:32 AM No comments: Links to this post