Andrew Thompson from Australia found in the Netherlands - Mom arrested

Eamonn Duff
September 9, 2010 - 6:45AM
A BOY believed to be the kidnapped son of the former NSW deputy fire chief, Ken Thompson, has been found in northern Europe after a two-and-a-half year global search.

Andrew Thompson was three years old when he was abducted in Sydney by his mother, Melinda Stratton, on April 24, 2008, after a custody battle. 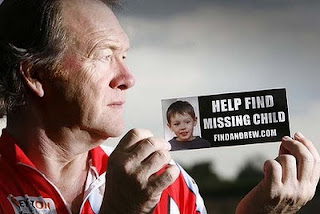 Ms Stratton eluded the Australian Federal Police, Interpol and missing children's organisations until she was picked up on Monday after attempting to enrol Andrew in school.

Noticing the six-year-old's passport had expired, the school's principal ran a security check and discovered the boy was the subject of more than 180 Interpol alerts.

Mr Thompson, who quit his job in May to cycle across Europe on a public crusade to find his son, was on a train to the city last night from Stuttgart. He told the Herald he was reluctant to elaborate on the case as it may hinder investigations.

But a family friend, Robin Bowles, said police had contacted Mr Thompson advising him that his son was safe with welfare officials and his former wife was in custody. Arrangements for her extradition were due to be raised in a court appearance yesterday.

"Ken's ecstatic, emotional, relieved, overjoyed and still in a total state of shock," Ms Bowles said. "It is no secret there were fears for both Melinda's and Andrew's safety and the longer time went on, the fear grew deeper within Ken that maybe he'd never see his son again. He wants to see him. He can't wait a moment longer."

Ms Stratton fled Australia four months after she and Mr Thompson failed to reach a custody settlement. She flew with Andrew to Germany, then vanished. In a letter to her family, she claimed she was forced to flee after losing faith in the Family Court over its handling of serious allegations she levelled against her former husband.

But in December 2008 Mr Thompson (ed note: changed from original Stratton) successfully lobbied the Family Court to lift a ban on identifying Andrew and his plight.

In granting the order, the court allowed Mr Thompson to release a psychiatric report – compiled before his former wife's disappearance – revealing she had a paranoia disorder that severely impaired her ability as a parent.

Mr Thompson made an emotional plea before heading to Europe: "The journey will never end until I find my son ... Melinda, if you're reading this, or if you should hear that I'm passing through a town near you in the coming weeks, I beg you, please get in touch. Free me from this nightmare."


This story was found at: http://www.smh.com.au/national/after-almost-three-years-missing-son-finally-surfaces-20100909-151lr.html
Posted by Michael J. Murphy at 4:59 PM No comments: Links to this post