Dads on the Air - DEPARTMENT OF CHILD STEALING

Dads on the Air | www.dadsontheair.net

With special guest:
This is a week where community alarm bells should have been ringing loudly. It’s a week when the Australian Government released a report showing that in the year 2009, more than 210,000 children were the subject of child protection notifications, in excess of 33,000 were the subject of one or more substantiations, over 35,000 were on care and protection orders and government agencies removed more than 34,000 children from their biological parents.

These figures are especially troubling since on the following day the NT coroner declared the death of a 12 year old girl ,who was under state protection there, as ‘appalling’ and ‘needless’.

Today we speak to one of those biological parents 'Daniel', a distraught father who has spent the past 13 years desperately trying to have his son returned to his care and protection, following the boys' removal from his parents’ care by Docs of NSW,  on the bases of allegations of abuse and neglect, which were subsequently proven to be false.
The desperate emotional trauma of having their son removed on the basis of false allegations, eventually resulted in the marriage breakdown, and this father is almost at the end of his tether at not having had contact with his long lost son for many years.

More questions urgently need to be asked in order to establish the possible underlying causes for such a disturbing high level of government involvement in the child stealing racket that appears to be taking place.

Of particular interest is the fact that the governments' own reports show that tens of thousands of the nation’s children are removed from one or more of their parents every year with the help of a number of government agencies such as the Family Courts, the Domestic Violence Industry and the departments of community services.

Again our own investigations show the frightening speed and ease by which your biological children can be removed from your care, by any of these government agencies on the basis of the flimsiest of evidence, unsupported hearsay or vindictive false allegations.

‘Daniel’ not his real name for legal reasons joins us today to tell his story in order to warn others about the dangers posed to parent/child relationships by  those government agencies that parade under the nauseating ‘Best Interest of the Children’ Mantra, as they happily remove your children.

For more information about Dads on the Air, click here
Posted by Michael J. Murphy at 10:08 PM No comments: Links to this post

Why no one invades Switzerland

I'm not a booster of gun control nor an advocate for a weapon in every home but the Swiss do a number of things better than others. This seems to be one of them.  I think there is a lesson here for gun control advocates.  The idea  is in keeping with a very well organized military service commitment.


Posted by Michael J. Murphy at 12:55 PM No comments: Links to this post

Captured by Cellphone Photography The University of Ottawa Women's Resource Centre- Hate Speech-Sent to FathersCan by a third party via a student at Ottawa University. Its an "In the Window Now" Situation. Male Students report being outraged
FathersCan asks what would the public and media reaction  be if the wording was somewhat different and reflected a male perspective about dangerous women? The reader can use their imagination Would a 'Men's Resource Centre' be allowed to display something akin to this (even were there to be such a resource centre which there isn't)  So? Hate Speech or Not? Does the Law allow this? Not for men to do for sure. 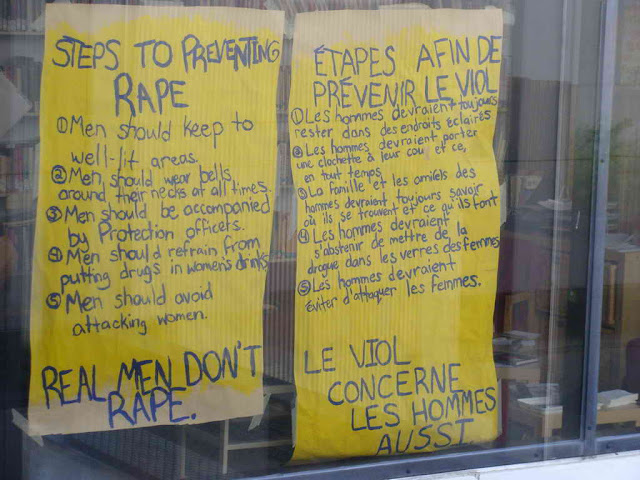