I make no apologies for being a shared parenting advocate. As a family therapist, I've understood for years that kids need both parents. But in 2003, the clinical benefits that are achieved for children in shared parenting and the negative outcomes that often result when a parent is under involved became even more meaningful to me when my son was born.

Yet with all the research and understanding, a minute few still try and argue that the need for shared parenting somehow changes in a divorce or never married dynamic. Unfounded rationalizations include "schlepping from one house to the other is burdensome for kids and they'll do better if they have one primary home." Fact is, most family therapists and research concludes that as long as the environment is safe, predictable and consistent, children do fine in multiple environments. However, they do poorly when the frequency of contact with their parent is restricted to a visitor status and the voids then created tend to be acted out in highly destructive ways.

As a valued family clinician once told me early on in my case, a child's need for a healthy attachment and loving relationship with both parents trumps any need for one residence, neighborhood, etc. It takes real time to develop and maintain that sort of relationship. I've seen this truth illustrated in my child's life. He spends equal time between two homes that are 30 miles apart but he's thriving in every way. Not surprising, children, like adults, define relationships by the frequency of contact and quality of time they spend with someone so regardless of a marital status, it requires a quantity of time to authenticate a parental role. If you're being challenged in your legal ability to achieve something to that end, retain an experienced family law attorney who understands what the Michigan Parenting Time Guideline states:

Michigan statutes recognize that when parents separate or divorce, their children's best interests are served by continuation of the parent/child relationship. So strong is this recognition that the law establishes a presumption that it is in the best interests of a children to have strong relationships with both parents. Therefore, parenting time should be of a frequency, duration and type reasonably calculated to promote a strong relationship between the children and parent. The children have a right to parenting time unless the court determines on the record by clear and convincing evidence that parenting time would endanger the children's physical, mental or emotional health [MCL 722.27a].

Calculating parenting time in a frequency, duration and type that promotes strong relationships between children and their parents. Sounds like a novel idea, certainly nothing that requires sophisticated clinical training or legal brilliance, yet this remains the single most controversial aspect of divorce. One reason why is that some parents continue fighting by trying to use children as pawns to control and hurt the other parent.

Make no mistake about it, taking a willing parent out of the mix of parenting will ultimately hurt and scar your children.

It is sad that many parents continue to relitigate cases that have been decided. Judges are empowered to protect children, they have the authority to protect them from parents that induce mental abuse continually by relitigating. At a minimum the moving party should cover all expenses including court costs and attorney fees for all the parties continuing to use the court as a battlefield for their own agenda. It is wise to look seriously at what one is trying to accomplish by relitigating. If one is continuing to fight and file motions, it may be wise to seek the help of a mental health professional for a complete mental health examination of competence to file motions ( One should rule out Mood disorders, Personality disorders, thought disorders and co-morbidities ). In California, when a party continues to relitigate full custody is given to the party that promotes the MOST time with the other parent. Another way of saying the same thing is that the party who files the most motions, interfering with the other parent and their time. By default and the order of the Judge, full custody goes to the parent who has to defend themselves from frivolous motions. In conclusion, a child needs both parents unless one parent is using the child as a weapon to sabotage that other parents relationship. If that is the case, the court should step in and order full custody to the parent that continues to be victimized by frivolous motions and assess court costs, attorney fees and child support obligations to the moving party who continues the fight !

Your post is an interesting and powerful argument that shared parenting orders should be the rule, rather than the exception. In most custody cases, both parents are willing and able to participate in shared parenting. It's a tragedy that so many parents, dads or moms, spend so much money and time fighting over their roles when their children are in need of both of them equally. It's also sad that the thousands of dollars they're spending on attorneys and court fees is money that could be used for other things like vacations with their kids, or sports and other extra calicular activities and obviously, with the rising costs of education it's money that could be put away for college.

Absolutely! Shared parenting, by definition in the Michigan Parenting Time Guidelines and multitudes of research that conclude what common sense dictates, is presumed to be in the best interest of children yet it remains the exception rather than the rule in a majority of custody and parenting time orders. Trends are slowly, but absolutely, changing but when parents disagree, the system remains unnecessarily expensive and ripe for manipulation and that has to change.

Thanks for your comments,

Posted by Michael J. Murphy at 2:44 PM No comments: Links to this post 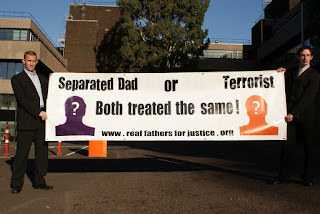 I am contacting your organisation on behalf of Real Fathers for Justice, we are a Direct Action Parenting Group, raising public awareness and applying pressure for long overdue changes in UK Family Law.

The 08/10/2009, a date that will be forever embedded in the history books of children's and fathers rights in Northern Ireland. Recognition of the hard work that has been done by RFFJ NORTHERN Ireland was finally recognised by the government.

RFFJ members Pete Morris and Hugh Mc Cloy met with Eileen Sung and her team in the castle buildings in Stormont, Eileen Sung heads the Gender and Sexual Orientation Equality Unit for the Northern Ireland Executive Office, and is responsible for coordinating and promoting policy work on gender and sexual orientation equality across the Northern Ireland Civil Service (NICS) and public sector bodies. Sung has recently been awarded a Fellowship under the prestigious global Fulbright Program that will enable her to conduct research at IRWG. Born and educated in Northern Ireland, she is eager to learn about American culture and how it compares to life in Belfast. Sung's research will focus on women's paid and unpaid work and the cultural and social influences that affect those choices, including the gender pay gap and work/life balance.

The meeting was a resounding success, it was undertaken that the research from RJJF concerning family law, domestic violence, divorce, child abuse, education, health and social issues will be addressed and feedback will be given to RFFJ on the issues raised. From this also we will be involved in consulting on policies that will be affecting the areas we highlighted and for the first time in the history of Northern Ireland a fully represented conference on the rights of children from a fathers perspective will be partially funded by the government and will take place in Belfast in the near future and will be hosted by RFFJ.

Further on from this Hugh Mc Cloy took the opportunity to have a quick meeting with the Human Rights Commission, what has happened today has set the wheels in motion for Northern Irelands to take the lead in all the issues highlighted by RFFJ and RFFJ will lead the way in leading Northern Ireland into parity in equality of rights in this country.

We entered this meeting looking for recognition of our research and left with three identifiable gains, it is a good day for families, for children for fathers and for mothers in that the Northern Ireland executive now have the ability to look into all issues surrounding family law objectively.

Quotes from the meeting

More quotes from the meeting are available and can be gained by contacting Hugh McCloy using the details provided. I will take this opportunity for the warm welcome form the gender equality unit and thank them for their time and for now what they will be doing to aid in children's rights.

"Today's problems cannot be solved at the same level of thinking that created them." ~Albert Einstein"

Posted by Michael J. Murphy at 1:00 PM No comments: Links to this post

I'm not overly religious, as is the singer, but I suggest you have a look at this video of the song "Don't Worry Now" from a very talented performer, Britt Nicole, about her daddy. If you are a dad estranged from your daughter this is from a child who saw her family disintegrate at the age of 7. This is an acoustic version with an interview to give some background on how she felt about the loss of her dad and his relegation to a visitor. See the second video for some powerful orchestration.

This second video is fully orchestrated with lyrics. If you are a dad like me who loves his daughters deeply then make sure you have a tissue nearby. Its a powerful message from a child to her father.


Posted by Michael J. Murphy at 12:15 PM No comments: Links to this post