RONA has been Co-opted in the war against Men

RONA your local building center largely with a male customer base has bought the feminist propaganda that men are abusers and the Domestic Violence Industry needs their money to rebuild shelters.  They will have the effrontery to ask these males customers for a donation.  What the  clearly chivalrous brain trust who dreamed this up  at Rona doesn't know is the initiation of DV is often done by the female in upwards of 70% of situations. Harvard Medical School and the American Psychiatric Association both recently announced a major national study in the U.S. that found half of heterosexual domestic violence is reciprocal and that: "Regarding perpetration of violence, more women than men (25 percent versus 11 percent) were responsible. In fact, 71 percent of the instigators in nonreciprocal partner violence were women."

Part of their verbiage is found here: http://www.rona.ca/rona/servlet/rona/women.jsp?storeId=10001&jspStoreDir=rona&langId=-1

RONA is proud to be associated with an organization that works every day to help women facing serious challenges and give them a second chance.

To highlight this commitment, RONA is launching a fundraising campaign online and at all RONA stores across the country, backed by a commitment to match the donated funds with labour and building materials to renovate women’s shelters.

Supporting the Canadian Women’s Foundation reinforces the role the company plays in society by giving these women an opportunity to rebuild their lives, not only for themselves but for their children as well.
Here's what else RONA doesn't know:  Domestic Violence is pretty much equal in Canada


Family violence in Canada: A statistical profile, 2005. An estimated 7% of women and 6% of men representing 653,000 women and 546,000 men in a current or previous spousal relationship encountered spousal violence during the five years up to and including 2004, according to a comprehensive Statistics Canada report on family violence.
http://www.statcan.gc.ca/Daily/English/050714/d050714a.htm
Canadian Homicide Stats 2008

Total 611, 465 men 146 female
Rate of homicides with firearms has increased 24% since 2002. Handgun use on increase (gangs don't register their weapons)
Women victims 24% - lowest proportion ever
Men Victims 76%
Both the rate of females killed (0.87 per 100,000 population), as well as the proportion
(24%), were the lowest since 1961
62 spousal homicides - no change from 2007
Lowest rate in 40 years
45 women 17 (27.4%)men
Do biased family law regimes in Canada complete with the acceptance of false allegations of abuse as truth, the denigration of dads and men have anything to do with the murder suicides in families?
RONA doesn't know about single moms in the USA and Australia being the most likely to kill or maltreat their children.

Australian Data on Children killed. Total of 16 by mother and new partner and 5 by biological father.
Of the total substantiated cases of abuse in 2007-08, including by parents and where the gender of the perpetrator was determined, 463 were carried out by women and 353 by men. 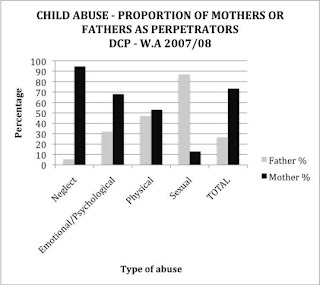 University of Western Sydney academic Micheal Woods said yesterday that the statistics debunked the myth that fathers posed the greatest risk to their children.
Mr Woods, co-director of the university's Men's Health Information and Resource Centre, said if similar data was available in other States it would show similar trends. 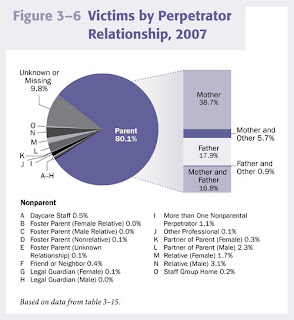 Victims by Perpetrator Relationship, 2007
This pie chart presents victims by relationship to their perpetrators. More than 80 percent (80.1%) of victims were maltreated by at least one parent. Nearly 40 percent (38.7%) of victims were maltreated by their mother acting on her own.
Note the rate by mom and other is 44.4% while dad and other is 18.8%. The rate by the mother is 2.36 times higher than dad. That is 236% greater. Now how to explain that away to those who believe only men are abusive.

RONA doesn't know these shelters are used for many other purposes including criminal behaviour. At any time 25% of the capacity is shown to have residents not there for DV. Others may say they are there for abuse but may not be as follows. One woman was able to hide successfully from Police for several weeks after kidnapping a child.  They are used by drug addicts who after abusing their families go to these shelters to "unwind" but can access drugs while present, illegal immigrants and bogus refugees  can hide undetected by immigration officers, some are used by transient women as rest stops. No independent financial or operational audits are undertaken and all clients are forced to sign non-disclosure agreements.

DV is a serious issue in Canada but all RONA's behaviour does is support the notion it is a single gender only issue.
There are 569 tax supported female shelters in Canada. There is not one tax supported Domestic Abuse shelter for men.  I'm suggesting men who believe in fairness to both genders, as DV is serious but not gendered, take their business elsewhere. There are lots of building centers to choose from.


Rona is no stranger to male bashing.  Peter Regan took them on in 2007 and the following column appeared in the National Post:


To adapt the old Molson Canadian tag line: I am ... an idiot. You read it right: I'm an incompetent goof. A pathetic primate who can barely function in our oh-so-complicated world.


Why the lowly self-assessment? No, I didn't invest in Bre-X. Nor do I drive an Aztek. Rather, it's the advertising industry that's convinced me I'ma loser due to one glaring prerequisite: I'ma guy.
For the last several months, I've taken note of radio and TV ads that involve situations involving two people: one a man and the other a woman. In every spot except one (by FedEx), men were portrayed as imbeciles. Even if the script established the male character as a successful business owner, he still came across like the classic Phil Hartman character, Unfrozen Cave Man Lawyer from Saturday Night Live. (The defrosted Neanderthal continually grunted that common-place things in today's world -- "flashing neon signs" and "fast-moving cars" -- would "frighten and confuse" him.)


In a recent Toyota radio ad, a male Toyota owner comes across as virtually brain damaged when he addresses a female Toyota customer-service clerk. He can't remember (or doesn't know) what needs to be serviced on his car. He doesn't even know what he wants to drink. Thank goodness for the know-it-all service rep who tells him what needs to be done to remedy his engine (without even popping the hood). She also informs him he's experiencing a craving for caffeine.


A CIBC radio ad establishes "Tom" as a successful businessman. Along comes a female customer who's not in Tom's line of business but, naturally, is an expert when it comes to Tom's trade. She tells him to install a CIBC e-commerce solution in a tone reminiscent of a principal addressing a kindergarten student.


Of note, one man recently had enough of the male-bashing. Peter Regan, a single parent in Calgary, filed a complaint with Advertising Standards Canada (ASC) after he took exception to a Rona ad. The spot depicts a female Rona employee dealing with a female customer who laments that her husband never helps around the house. The clerk responds: "That's OK. They [husbands] are all like that." In August, ASC decided the commercial indeed contravened regulations and "disparaged men and/or married men" and asked Rona to remove or alter the ad.


What is the unspoken strategy of having men cast as dimwits? It cannot be random chance. In fact, it's statistically impossible that in almost all ad scripts, the male is the one who is dazed and confused while the woman (or child) is portrayed as an oracle of wisdom.


My hunch: When it comes to getting slagged, men tend to take it, well, like a man. Aside from the aforementioned Rona complainer, men tend to be stoic and silent about such slights.


York University marketing professor Alan Middleton adds another noteworthy point: Since women in many households control the purse strings, ad agencies figure it's not a prudent idea to upset the individual who is likely to make the purchase. Thus, if the script calls for a dolt, it's a no-brainer the man will play the fool.
Indeed, as long as complainers such as Peter Regan remain the exception as opposed to the rule, expect men to be depicted as dumbbells in advertising for decades to come. Then again, what do I know?


d.menzies@sympatico.ca - David Menzies is a Toronto writer and pundit.

Posted by Michael J. Murphy at 1:12 PM No comments: Links to this post

Some Australian men are rising up to fight the laws that have painted them as defacto guilty of abusing their female partner as soon as an allegation is made.  Instead of whining about it they have taken action. Lets hope it spreads around the western world and we can get those raising false allegations, whether it is a female partner, wife, ex, lawyer, Domestic Violence  Shelter, welfare worker (I've got a good candidate working for the City of Sault Marie, welfare department,)  or social worker.
The civil rights of accused men are violated far too frequently in western democracies part of which is propaganda put out by Feminists and their testicularly challenged sycophants.

Thanks to Ken Thompson in OZ for the heads up. Ken's son Andrew was kidnapped by his wife to Europe and is still missing.MJM

GILL VOWLES
A TASMANIAN group has filed a $200 million class action against Premier David Bartlett and the Director of Public Prosecutions.

It is believed to be the first Australian class action against a law.

JAIL (Juries Against Illegal Laws) filed papers with the Federal Court of Australia on February 4 claiming that the Family Violence Act 2004 (Tasmania) was invalid.
The group is claiming $200 million in damages under Section 46 of the Australian Human Rights Commission Act.

JAIL is also seeking an additional $200,000 in damages for unlawful assault, trespass, negligence, conspiracy to cause economic loss, intimidation and defamation.

The writ further seeks an order that the Tasmanian Government and DPP Tim Ellis cease to engage in arresting people without proper evidence or procedures, giving police judicial powers, denying people the right to a fair and proper hearing and usurping the proper role of the courts.

JAIL president Ray Escobar said that if the class action was successful the money would be given to all the Tasmanians who had suffered under the Family Violence Act.

JAIL, formed in early 2008, now has more than 200 members around Tasmania who have been, or are related to, victims of false applications for violence orders.

Mr Escobar said JAIL was being represented by one of the finest legal minds in Australia, Sir John Walsh of Brannagh, who lives on Norfolk Island.


Sir John said he agreed to represent JAIL because the case raised important and fundamental questions of human rights, such as the presumption of innocence, right to a fair trial and the separation of powers.
"The legislation, and the way it is enforced, is contrary to human rights and to international law as accepted by Australia," Sir John said.

JAIL's application has been set down for hearing in the Tasmanian registry of the Federal Court of Australia at 10am on Monday, April 12.