Premier showing of 'Guilty Until Proven Innocent' A Father's Perspective

Many who’ve seen Janks Morton’s new documentary GUPI, have positively commented on the film and how it captures the essence of fathers experiences in family

court.  From custody issues to child support to access interference to false abuse allegations the film portrays family court through fathers’ eyes.
You are cordially invited to attend the premier showing of 'Guilty Until Proven Innocent' on July 26, 2011 at the Avalon Theater in Washington, DC.  If you can’t be there in person you can still participate and help make the evening a tremendous success.


Please read on and learn how you can be part of this history making event.  There will be a panel discussion after the film with Janks Morton and several other special guests.
Tickets are reasonably priced at $10.00 each.  If you live in the area and can attend go to www.gupifilm.com and order online.   Here is a flyer you can download and print or circulate via the internet to let others know about the film.

Help Reach Congress
If you're not in the area, you can still be a significant part of this night.  We want as many people from Capitol Hill to see the movie as possible.  If you are not able to attend, buy a ticket(s) for a legislator.  Next week an invitation will be hand delivered to the office of each legislator when someone who lives outside the local area purchases a ticket.  We will start by inviting each state’s two Senators and then extend the invitations to members of the House of Representatives.  You can see exactly how many members of your federal delegation (Senate and House Reps) are in Washington at this link.  Order tickets here.

Become an Event Sponsor
Each individual who purchases 10 or more tickets, will be recognized as a premier co-sponsor and be listed in the event program and on the ACFC website.   All you need to do is enter the number of tickets you want in the quantity box on the order page and press the update button.  We’ll use your state and zip code information to determine which legislators to invite.
Please purchase tickets as soon as possible.   Invitations to Congress need to be distributed early next week.

Use this Coupon when Ordering

On the order page enter PREMIERSH-OFFER (make sure to include the - ) in the coupon box and all shipping and handling costs will be waived on your ticket order.  If you are attending in person, print out your email confirmation and bring it with you to the theater, that’s your ticket.  For those who have sponsored tickets for legislators, we will have that record on hand.

Thanks in advance for participating, let's pack the house.  Help spread the word by forwarding this message to your family and friends.

There has been a significant amount of shared parenting and family law activity recently.  We'll send an update soon.  Stay tuned. 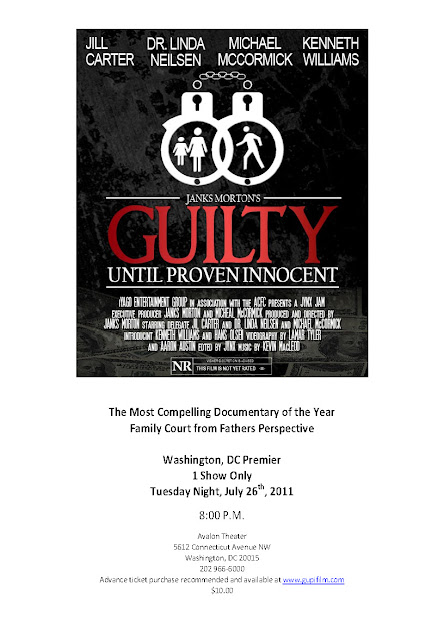 Posted by Michael J. Murphy at 8:35 PM No comments: Links to this post

It will be of interest, over time, to see how this shapes up. In heterosexual marriages in Canada the wife starts divorce proceedings in 75% of cases.  When we have two women who are partners we may well be able to see that females have expectations not necessarily tied to reality in terms of the partners they choose.  As an observer of human nature it has some degree of scientific curiosity for me.MJM

Lesbian couples are twice as likely as gay men to separate, according to new figures showing a 44% rise in the number of civil partnerships that were dissolved last year.

85 Comments
Almost 50,000 same-sex couples have formalised their relationships since civil partnerships were introduced in December 2005.

However, as growing numbers of couples register their partnerships, the number splitting up has also risen.

Last year, 509 civil partnerships were dissolved across the UK, an increase of 44% since 2009, when 353 couples separated.

In order to obtain a dissolution, a couple must have been in either a registered civil partnership or a same-sex partnership recognised abroad or 12 months.