In Ireland, as in most Western Democracies, misandry mixed with an insatiable desire by judges, politicians and many lawyers to use a misguided and hateful manner of chivalry, passing ownership of children to the mom, and marginalizing the dad to visitor status or worse. It will be seen in hindsight this manner of child division is not in their best interests at all but does extreme damage for a cornucopia of reasons I have stated elsewhere in this blog.  note this quote in the article "There is “no deliberate bias” against men in the family law courts, believes Anne Egan".  A common definition of bias is as follows:
The article then states immediately following moms have 88% of sole physical custody in Ireland.  Some how I think this is on the low side. One can never believe some researchers no matter what they see with their own eyes. They are either perceptually blind or ideologues. MJM 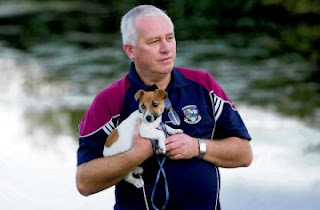 What happens to dads after a split?

Recent research shows that when a marriage ends, most fathers are left without the family home or primary care of the children. Men who feel they were mistreated by the system tell their stories to KATE HOLMQUIST

EVERY NIGHT before he goes to sleep, Joe, a separated father, looks at a picture of his children on his computer screen and tells them he loves them.

When Tom’s marriage broke up, he slept in his car near the family home because he wanted to be close by in case something happened to the children.

Cathal weeps when he speaks of how he came home from hospital after being stabbed by his wife to find his house emptied of “everything” – including his children. His wife had left a solicitor’s letter on the counter accusing him of being mentally ill and telling him she wanted a divorce.

All three men have struggled for years in the courts to gain access to their children and believe that they should have been made primary carers, in their children’s best interests. They tell of being so alienated from their children by their ex-wives, they’ve had to watch their children’s first holy communions and confirmations from the back of the church. They speak of telling social workers about their ex-wives’ abusive behaviour and of not being believed.

“I was really, really depressed before the separation, sleeping in the back sitting room. You weren’t walking on eggshells, you were walking on razor blades,” says Cathal, who showed The Irish Times an extensive psychiatrist’s report that declares him under stress due to the separation, but well mentally otherwise.

“I know men who killed themselves because they lost contact with their children,” says Declan Keaveney, a retired garda who spent €50,000 fighting through the courts to be made primary carer of his two children and even contemplated suicide himself. He eventually succeeded in becoming primary carer.“Men have no voice – we have nothing,” he says.

Keaveney, who is now is a volunteer with Amen, a support group for male victims of domestic abuse. He listens on a daily basis to men driven to the edge by rancorous separation wars in which children are often used as ammunition. “Parental alienation syndrome”, where one parent turns the children against another, is common, he says.

A report by One Family, an advocacy group for one-parent families, finds some fathers who, despite contact orders, are refused contact with their children by their wives and cannot get the HSE to intervene and enforce their rights.

Court delays also mean fathers can go months without seeing their children. One father says he “just gave up because it was too stressful . . . [my ex-wife] was on legal aid and I had a private solicitor which cost a lot of money and I just gave up”.

There is “no deliberate bias” against men in the family law courts, believes Anne Egan, a researcher who sat in on 158 in camera cases (where cases are heard in private) for her PhD, though the court “reinforces stereotypical views” that children need to be with their mother as primary carer – the result in 88 per cent of cases.

Another PhD researcher, Róisín O’Shea, found only 2.23 per cent of 493 cases had the children living with their father. While many fathers asked for 50/50 living arrangements, O’Shea saw this ordered by the court in just two cases.

Egan, who also interviewed fathers, says most accepted the mother as primary carer, but “they would have liked more contact rather than specific times and dates”. These fathers missed the daily informal involvement with their children over breakfast, the school run or even just a few minutes in the evening to hear about a child’s day.

The second major complaint was being left out of decision-making. “Most were not happy with the situation but it was working for them,” she says.

If a father wants to be primary carer, “it’s not always fair. There’s a battle royale if you are acting for a father,” says Marion Campbell, a private family law solicitor who has been dealing with separation cases since 1981, when she started her career in the legal aid board.

Due to the recession, a growing number of men have become stay-at-home fathers whose wives work full-time. It’s often the wife who wants to separate, yet if the father wants to remain in the home as primary carer, he needs maintenance paid by the wife and her agreement to leave the family home, which is practically unheard of (O’Shea’s study found not one case of fathers receiving maintenance).

Jobless and rejected men may have no choice but to move home to their parents’ house, Campbell says. Would a stay-at-home mother be asked to leave her house with no maintenance and limited access to her children because her husband wanted a separation? The question just doesn’t arise, Campbell points out.
Another unfair perception is that men are not physically assaulted by their wives, she adds. “I’ve come across a lot of cases, but women are much stronger and more proactive in issuing proceedings. Men bury their heads and come in at the last minute and quite a number are upset because they don’t want the separation,” says Campbell.

ONE FATHER WHO WAS physically abused says he never told anyone because “it’s embarrassing”. When parents fight in court over property and children, lawyers’ briefcases heave with psychiatrists’ and social workers’ reports, although hearings can be so brief that judges don’t always see everything.

Keaveney says the men he hears from often feel social workers have sided with their wives and barely listen to them, and that the wives’ allegations are always believed.

Joe says he experienced years of false accusations by his ex-wife before he finally received a verbal apology from a social worker who said he’d been right about his wife’s fragile mental state all along. For example, his wife went to gardaí accusing Joe of exposing their son to pornography during an access visit. Gardaí investigated and The Irish Times has seen a copy of a letter from An Garda Síochana telling Joe they found no basis for the allegations. For Joe, this was just one episode in a long campaign by his ex-wife to “destroy” him, even though she had left him for another man.

“Because she’s a woman she can say what she likes, do what she likes and is getting away with it. Because I’ve moved on, the only way she can get to me is through the kids. I know guys who have not seen their kids in five to 10 years.

“One father I know, hadn’t seen his son for eight years. Then he got a call through a solicitor to say his son had attempted suicide. Can you imagine how he feels?”

Tom weeps when he speaks of living “in limbo”. After years of court battles costing in the region of €50,000, he has good access to his children but still worries about their safety. At the height of the conflict, he would drive by a place where he knew his children would be, just to see them from a distance. “I’m trying to move on, but last week, I broke down leaving the kids back to their mother. I was leaving them to somebody I don’t trust.” Sleepless nights have become routine, but he keeps going, trying to rebuild his life and his business, “for my kids”.

Posted by Michael J. Murphy at 3:34 PM No comments: Links to this post