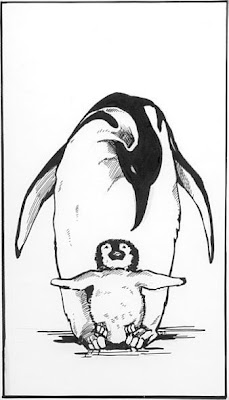 
The father emperor penguin forgoes all food for up to 4 months sheltering the egg and nurturing the chick.


NEWS RELEASE: April 2, 2004
On March 31, 2004, the first report of the "Domestic Violence Death Review Committee" was released to the Chief Coroner of Ontario and reported in the media on April 1, 2004. The Coroner's Office is in place to protect Ontarians and who “speak for the dead to protect the living.”

This Report clearly shows that the government funded Domestic Violence Death Review Committee has failed its purpose and the purpose of the Coroner’s office. It has degenerated into a body pushing long discredited political positions, making unsupported claims, while ignoring the interests of Ontario communities, and instead seeking funds for bureaucrats. Lawyer Walter Fox indicated that “if Enron had filed such a report to its shareholders, the SEC would have taken immediate steps to close them down.”

In analysing only 11 deaths related to family dysfunction, and only deaths which were classed as homicides under police guidelines, the report was purposefully slanted and biased. Hundreds of deaths were not examined. In particular, deaths of children and men were ignored. The parties represented on the committee reflect just this purposeful bias.

This Study provides no criteria by which to identify “preventable deaths.” This committee could not even identify the risks after the death had actually occurred. There is no science here. Short of isolating each and every woman from the rest of society, prevention of such a rare occurrence is simply not possible by the State. This “prevention” by “risk assessment” is nothing more than empty jargon. Only by addressing the underlying social and legal problems will solutions be found.

In Canada, about 25% of spousal homicides have women killing male victims. There were no such occurrences considered in this report. We know that family violence, and the "enforcement" system in Ontario kills, by draining the hope of men leading to depression and suicide. We know that when men are killed these deaths are often classed as suicides (e.g. Scott Dell, murdered on December 29, 1995 in Killaloe, Ontario), as accidents, or as something the victim somehow “deserved.”

Children are too often killed miserably and painfully in Ontario and in few cases is it ever considered as a homicide. This report dealt with a single child who died at the hands of one of the least likely perpetrators — her biological father — who also suicided. In few situations will the courts ever punish the slaughter of children by a female parent (such as in the deaths of
News Release April 2, 2004 Page 2

Jordan Desmond Heikamp, Sara Cao, and Hazel Ann Coombs in Toronto) so rarely do police lay a charge of homicide.

It is time that this excuse for a committee be disbanded and a committee that seeks real solutions be formed. This committee needs:


It is time to work to save lives in Ontario. It is time for the Coroner’s Office to do its job.
For further information, call Brian Jenkins, at (416)315-5298.
Posted by Michael J. Murphy at 3:08 PM No comments: Links to this post