In Australia: FAMILY relationship centres Cuts to send family battles back to court

I suspect they will not cut the programs that buy votes but will do a disservice to families, the backbone of the country.MJM

Cuts to send family battles back to court

FAMILY relationship centres created by the Howard government to keep families out of courtrooms have had their funding slashed by $43.9 million, a move experts say could drive family disputes back into the courts.


Under changes outlined in the budget, families will have to pay for some counselling sessions that were previously free.

A means test will be applied to counselling services, forcing separating parents to pay for the service if, individually, one of them earns more than $50,000.

The measure was hidden in the detail of the budget papers and was not mentioned in the document that details cuts and increases to programs.

Mr McClelland's spokesman said total funding for the program would be just over $200m each year, while family dispute resolution services would get $90m a year. "It is appropriate for those who use FRC services to contribute to the cost of their provision if they are able to afford it," the spokesman said.

The means test will be introduced from July 1 next year.

Even with the means test, about two-thirds of clients would continue to receive up to three free hours of mediation.

"Separating families will continue to receive a range of free services and support from FRCs, including intake assessment and screening interviews, referral services, information sessions and facilities for children," the spokesman said.

Family relationship centres have been set up across the country to keep children out of courtrooms, to reduce the financial cost to government of family break-ups and battles in the Family Court, and to lessen the number of acrimonious disputes and custody battles over children.

The centres offer a full range of relationship advice, including pre-marriage counselling, information for separating couples, mediation to help parents gain access to children and advice and help for children, grandparents and other family members.

Families in dispute are generally obliged to try to mediate before commencing proceedings in the Family Court. Centre clients now receive three hours of mediation free at 65 FRCs throughout Australia.
If a session runs longer than three hours, the FRC may charge a fee of $25 to $100 per person per hour for the extra hours.

The new means test will lead to a fee of $30 per hour for the second and third hours of mediation for those earning more than $50,000.

Relationships Australia vice-president Anne Hollonds, who runs about half of Australia's 65 centres, said the sector was baffled by the cuts, which would hurt families
.
"You can't resolve disputes in an hour," she said.

"We are baffled that there would be cuts to a program that has been proven to be successful," she said.
Catholic Social Services Australia executive director Frank Quinlan said the government was abandoning a commitment to help families work through their problems without courts and lawyers.

"It looks like a shift from talking through problems to solving problems through legal dispute," Mr Quinlan said.

That study involved 28,000 people who said the support services they received helped them to manage in a more positive way the conflict and distress of separation where children are involved.
"By reducing current investment and planning even more cuts in the future, this government is walking away from family law reforms and acting contrary to its own evidence base," she said.

http://www.theaustralian.com.au/news/nation/cuts-to-send-family-battles-back-to-court/story-e6frg6nf-1225865755234
Posted by Michael J. Murphy at 11:43 AM No comments: Links to this post

Domestic Violence Awareness Day
Saturday, June 5, 2010
Wolf Performance Hall
251 Dundas Street
5:30 P.M. to 9:30 P.M.
Attend a conference devoted to exploring the rarely talked about reality of domestic violence against men. Government and the media want you to believe it only happens to women. It’s time to come hear the truth and finally separate fact from fiction. With years of political experience and legal knowledge between them, these dynamic speakers have all had inside access as to how men are really viewed by our government and legal system, and after June 5th, so will you. A Q&A session will follow each presenter’s discussion. Doug Lucio will also be speaking in honor of his son David Lucio. Following the conference, a candle-lit vigil will be held in order to help raise public awareness of violence against men, which will also include a walk to the London Police Station in honour of David Lucio.


Presented by
London Equal Parenting Committee
Tickets will be available at the door
or can be purchased online at
www.canadianepc.com
You can also contact Brad Phone: 519-614-8713
Email: lepcinfo@gmail.com
Web: www.canadianepc.com/lepc
Cost: $20/person
Speakers:

Roger Galloway: Born in Sarnia, Mr. Gallaway holds a BA from the University of Western Ontario and an LLB from the University of Windsor. He practiced law before entering political life, initially as Mayor of Point Edward (1991) and subsequently as the Member of Parliament from 1993 to 2006. Gallaway was a Committee Chair in the House of Commons, a Parliamentary Secretary and was made a Queen’s Privy Councillor by the  Governor-General in 2003. In 1998 he was the Commons’ Chair of the Special Joint Committee of the House and the Senate on custody and access which produced the report entitled For the Sake of the Children. He now teaches and does foreign development work for Sarnia’s Lambton College. 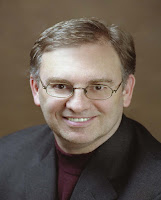 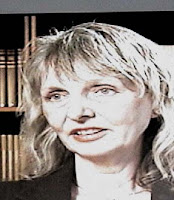 Marty McKay obtained a Ph.D. and post-doctoral qualifications in psychology and has over 30 years of experience in working within the court systems both in Canada and the U.S. Her professional experience with interpersonal violence dates back to 1975 when she began consulting to Children's Aid Societies throughout southwestern Ontario and to women's shelters. In her work, she accumulated case history data which demonstrated that violent behaviour was a problem which was not gender specific. Her message has been that, in order to deal with interpersonal violence, it is important that objective data, rather than politically convenient myths, be used for formulation of public policy in order to effectively combat violence and to promote justice. 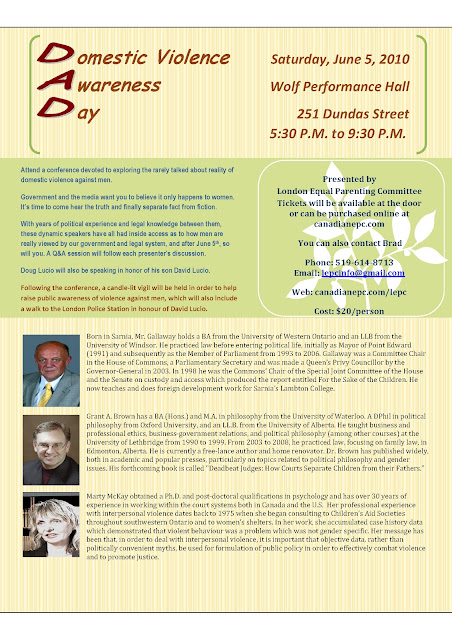 Posted by Michael J. Murphy at 11:23 AM 3 comments: Links to this post