For Immediate Release 3rd February
Families Need Fathers Welcomes Australian Report on Shared Parenting Legislation
- One of the biggest family policy research projects has been undertaken in Australia which evaluates their 2006 shared parenting legislation.
- Shared Parenting legislation an urgent priority for the UK Government.
The Australian Government has just published a report by the Australian Institute of Family Studies, which evaluates their 2006 shared parenting legislation.
It is one of the biggest family policy research projects ever undertaken. 28,000 parents, grandparents and family law professionals provided information. Thus its findings can be seen as authoritative.
These findings include:
The report covers the Act comprehensively. One theme is that while the Act made progress on dealing with domestic violence and other abuse, more needs to be done. The same could be said here, though the UK Government has rightly introduced a raft of legislation to protect parents and children, and allows the courts to make protective orders when allegations are upheld, including Prohibited Steps Orders, Non-Molestation and Occupation Orders. It is crucial that such accusations are proven in court. Sadly, it is all too common that false accusations are made to exclude the other parent from a child’s life, damaging the child’s prospects in life.
Jon Davies, Chief Executive of Families Need Fathers, commented “this evaluation is a major step forward to understanding shared parenting and the impact of shared parenting legislation. Australia is planning ahead with future generations whose parenting will be better because they have known the love of two parents. It is time the UK followed suit.”
NOTES FOR EDITORS
The Australian report can be obtained from http://www.aifs.gov.au/institute/pubs/fle/evaluationreport.pdf.
-  ENDS -
Families Need Fathers (FNF) is a registered charity providing information and support on shared parenting issues arising from family breakdown, and support to divorced and separated parents, irrespective of gender or marital status. Our primary concern is the maintenance of the child’s relationship with both parents. Founded in 1974, FNF helps thousands of parents every year.
For comment, case studies or information please contact:
Dr. Craig Pickering, Parliamentary Officer 07949 637 323
Julius Hinks, Director of Communications 07979 206 384
Jon Davies, FNF CEO 07976 935 986
Becky Jarvis, Policy & Information Officer 020 7613 5060
John Baker, FNF Trustee 07881 644 917
Posted by Michael J. Murphy at 11:50 PM No comments: Links to this post

Antonia Zerbisias blames everything on Harper and deranged Men

The Zerb is at it again over at the Trawna Red Star and has some of her usual bevy of Marxist supporters lining up to castigate all males and try to suggest shared parenting is a conspiracy of the religious right, men are too abusive to have shared custody etc. It's the same old BS. The Zerb is a bitter and extreme Marxist Feminist who rages on about her plight while denigrating all males and any one not in keeping with her own very askew view of the universe. 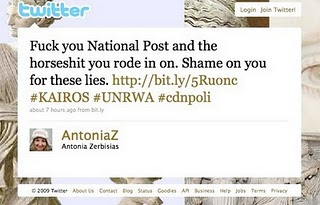 I left the  below comment among others on the site.  To the left you can view her gift for the written word as a columnist and blogger for the Toronto Star.
I have read, digested, fermented and comprehended your rant for today. I guess there are extreme groups on both sides of the gender war but you most certainly comprise leadership of a very bitter feminist, very far left extreme.You rely on blogs by retired Grandmothers for your info. She did move left and she is a kindly grandmother just afraid of phantom religiosity as you are.
You have supporters who are bitter over the hill male feminists who use the same cherry picked disingenuous forms of discourse.  How can you ever expect respect as a person of credible insight by writing in such a manner.  The joint custody you speak of is a legal fiction. Over 90% of physical custody in Canada goes to moms. Eight percent to dads.
Some of your supporters are very misinformed on the Australian reviews. The main report was completed as follows: It appears common sense may prevail in Australia given the Australian Institute of Family Studies (AIFS) have researched and found some non-partisan, non-ideological factors in favour of shared parenting. They have indicated they have found no correlation between violence and shared parenting, there has been a 22% reduction in court cases, and the practice of shared parenting is widely supported. The review, spread over two years involved 28,000 people, including 15,000 parents and  for most people it worked well.  It shows 80 per cent of parents are co-operating.

The Zerb, in the picture at right,  doesn't do women any favours with her rants. She is a self styled victim oriented feminist who lets her emotions run rampant over logic, fairness, good research and most of all common sense. Remember the old stereotype of women being too emotional to hold down certain occupations. This person does that no favours. The bromide, however, is just that in the same way men are too violent to share custody of children.  It is way past time to move past these phony cliches and work cooperatively toward children's best interests which includes two parents in their lives after divorce just as it was before hand.
Much of what she has stated is cherry picked so you go away with a wrong impression such as joint custody.
She states:
"It should come as no surprise that the more extreme elements of the "Men's Rights" movement are big fans of Prime Minister Stephen Harper."
Not necessarily AZ. Harper's party is supposed to be the party of family values but they have not yet done anything dealing with reform of the Divorce act. It has been left to one member to sponsor a bill that their Justice Minister, Nicholson, says does not have his support.  The only party leader who has stated in writing he supports shared Parenting is Iggy  in one of his books. Iggy, however, has changed his tune on torture which he supported so he could change his mind on shared parenting.
After all, the more fanatical Men's Rights Activists (MRAs) – those who keep angry blogs, send me vicious emails, denigrate "radical feminists," and act as if women get a better deal in life – have much in common with the TheoCons in Harper's caucus and inner circle.
Its clear the Zerb is not having a good day while writing this but you will notice the anti-Harper crowd throw logic to the wind when they rant on. Everything becomes Harper's fault, including global warming, and they often forget what it was they were arguing against to start with.
Which would explain why Pastor Maurice Vellacott of Saskatoon-Wanuskewin, past chair of the Pro-Life Caucus, proponent of spurious research on women's health, creationist and agitator against same-sex rights, could get away with introducing Bill C-422, which would amend the Divorce Act to automatically award, regardless of history, "equal parenting" to warring couples.
Note the ad hominem attacks on the man sponsoring the bill. Rather than deal with the substance of the legislation attack the person to see if anything sticks.  Its the same approach with Harper. Sorry Zerby there is no automatic awarding of children. Shared Parenting in C-422 has a rebuttal presumption for "fit" parents. If allegations are made they will be investigated and the judge will decide. We will also try to get in place sanctions for those who make false allegations.
Note that, just because Harper's prorogation of Parliament killed 37 bills midstream, the private members' bills didn't die. They live on until they are passed – just as Conservative MP Candy Hoeppner's bill to scrap the long gun registry did last fall – or until they are voted off the island. MRAs love Vellacott's bill because, if they're as seriously deranged as some seem to be, they can continue to exercise control over their ex-wives and children.
She is really messed up probably by recent attacks on her in the blogosphere, this one included, over her idiotic Tweet above and is  probably causing her lack of sleep.  Hopefully she is not a mother but I do pity her partner if she still has one. These rants are clearly causing her some emotional grief. She is resorting to some "hot button" words like "seriously deranged" but she must not be looking into the mirror. Its appropriately amusing someone like this actually can get paid by Canada's largest circulation daily for this utter nonsense.

You opine "...which would amend the Divorce Act to automatically award, regardless of history, "equal parenting" to warring couples."

You have done your usual emotional over logic analysis of PMB C-422 by attacking the bill's sponsor without actually understanding the legislation.  The bill proposes no such thing. There is a rebuttal presumption for "fit" parents. If someone is found through thorough investigation to be unfit the judge will rule accordingly. The unfit parent could be of either gender.
For the rest you can go to the link below:
http://www.thestar.com/living/article/759534--men-s-rights-activists-drive-harper-s-policies#article
For a rebuttal on her references to  The Interim go here:
http://www.theinterim.com/soconvivium/those-big-bad-anti-women-tories/
Posted by Michael J. Murphy at 4:05 PM 4 comments: Links to this post