Are Vancouver and Delta police acting like Jackbooted Brown Shirts?

You may have heard of the term FemiNazi.  That term applies to mendacious propaganda put out by feminist groups, which vilifies without merit all men as abusers and all women as victims. They use false research and information to support this contention. It can involve false allegations including both physical and sexual abuse of women and children. It is designed solely to ruin men's lives and continue the tax supported entitlement system passed by testicularly challenged politicians. Jack Layton, Ontario Premier  McGuinty, Chris Bentley, AG, Ontario are three examples that come to mind.  It is ironic Layton now has Prostate Cancer so in his case it is more than a metaphor. He is Canada's leading "Girly Man" and political opportunist.

Many DV shelters are the HQ's for this and they actively advise moms and women to bring about allegations of abuse. Lawyers are clever at it couching it in terms of areas where certain behaviours may enhance the getting of permanent custody.  With moms, who get 90% of sole custody, it works well and has for years. It is so embedded in the legal culture that training provided to Judges by the National Judicial Institute incorporates the work of such feminist sycophants as Peter Jaffe, a teacher at the University of Western Ontario. Jafffe turns out very one-sided reports which, with pretty much 100% accuracy, always support the claim of a one sided gendered abuse. The London Police Chief Faulkner, worships at the feet of Jaffe and he has created a corporate culture in London, Ontario similar to Vancouver.

It is no accident Family Court Judges across this vast nation make such consistent decisions favouring moms.  Man is bad - woman is benign.  The real world tells a different story with DV as equally mutual and in the majority of cases initiated by the female.

One can see the outcome of this culture which is obviously embedded in some Police Services as well. The two thugs, who are supposed to serve and protect as Police Officers, acted like Nazi Goons and what they did to this family is unforgivable.  Are they fired and charged with criminal assault yet?  Has anyone seen a mug shot of them? In fact, has anyone seen their pictures at all?

It seems clear the Delta Police are as corrupt as the Vancouver Police Service and have botched the investigation.  The war on men continues and this is only the tip of the iceberg. Everyday across Canada innocent men are thrown into jail under similar circumstances. The only difference is you don't hear about it. In this case the incompetent thugs got the wrong person.  Even if they had found the right house only an allegation had been made which is not proof of guilt.


The bottom line message that needs repeating over and over is Domestic Violence is not a zero sum problem only applying to women. It is a human and family problem. It is time to change the paradigm and it’s time to stop the political correctness including Nazi style police actions. .  In Canada DV is pretty much equal between men and women with females actually precipitating it at a higher rate than men.  Why do they do this? Simple - because they can - men seldom hit back.  Many men need services as well and its time to provide it rather than just a single gender.

Feminism in this day and age is the true "F" word and sooner or later men will stop "sucking" this up and find their family jewels to become a potent political force.MJM 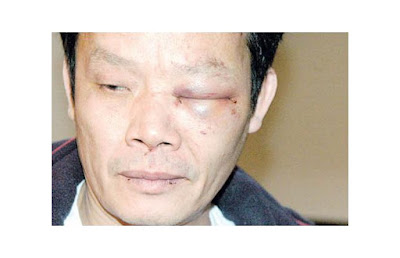 Yao Wei Wu is due to return to hospital to assess damage to his eye.

A Vancouver man who was mistakenly beaten by two police officers says Delta police have botched their investigation of the incident.

In the early hours of Jan. 21, Yao Wei Wu, 44, was woken up, dragged out of his house on Lanark Street and beaten by two police officers in plain clothes.

Wu, a tiling subcontractor, suffered fractures to his face and injuries to his legs and back. His eyes were swollen shut. His wife, Chi Nan Man, who was present during the assault, says she has suffered serious psychological trauma. 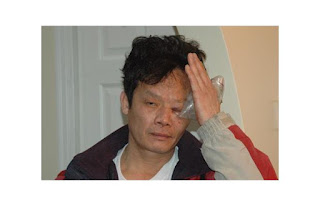 Vancouver police subsequently apologized, saying the officers had been called to a domestic-violence incident but had got the wrong address.

Police Chief Jim Chu asked the Delta police to conduct an “independent” investigation into the matter.
But Wu says he is unhappy with the Delta Police Department.

In a statement of claim filed in B.C. Supreme Court, Wu says that although investigators were quickly able to ascertain that officers Nicholas Florkow and Bryan London had perpetrated a serious assault, they’ve breached their duty and conducted a negligent investigation.

The suit says Delta police failed to arrest and detain the two officers, failed to interview them and failed to obtain physical evidence of the trespass and assault, including fingerprints, blood and tissue samples, DNA evidence and photos.

It says Delta police failed to gather physical evidence for tests, failed to interview material witnesses and failed to prepare a report to Crown counsel in a timely way, or at all, and failed to recommend charges be laid.
“The Wu family is very dissatisfied with the investigation of this matter,” says a statement released by Cameron Ward, Wu’s lawyer.

“They feel that charges should have been laid weeks ago and that the men who beat Mr. Wu up are receiving preferential treatment because they are police officers. They don’t believe the Canadian justice system should work this way.”

The statement says the Wu family was asked to file a complaint with the Office of the Police Complaint Commissioner but they have no confidence with that process, because it involves police investigating police. 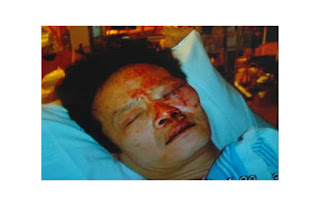 “The OPCC is staffed almost entirely with former police officers who must naturally be uncomfortable finding fault with their former colleagues.”

The plaintiffs are seeking unspecified general and special damages as well as aggravated, exemplary and/or punitive damages.

No statement of defence has been filed by the defendants, which include the city of Vancouver, the two Vancouver cops and the Delta police.

Vancouver police referred questions to Delta police. A spokesman for the Delta police said there would be no comment and added that he couldn’t say when the investigation will be complete.

A statement of claim contains allegations that have not been proven in court.

http://www.theprovince.com/news/beaten+Vancouver+police+files+suit+against+city+cops+investigators/2647707/story.html
Posted by Michael J. Murphy at 10:53 AM No comments: Links to this post