Real fathers for justice Press Release 19/03/10
Staff ‘denied access’ to family court
This morning at around 5am a lone activist barricaded the entrance to Darlington county court with a motorcycle chain.


The action was to highlight an injustice meted out in the family courts to a serviceman who had recently returned from a tour of duty in Afghanistan.


Real fathers for justice can confirm we were approached for assistance prior to this stunt by a serving soldier, he wishes to deny staff access to the building the way they have assisted his estranged wife to deny him access to his home and children.


An Rffj spokesman said:
“Although we were not directly involved in this stunt we have sympathy with this father and fully understand why he chose to break the law.”


“We suggested if he was determined to protest that as today was St. Joseph’s day, the patron Saint of fathers, it would be an appropriate day to take peaceful direct action” 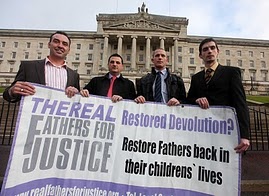 “The father in question is a serving soldier so cannot be identified, we will call him Clive.”


Clive asked us to prepare the following statement as to the reasons he took the action this morning.


“I am a decorated soldier and have recently completed a 6 month tour of duty in Afghanistan; I also served in the conflict in Iraq.”


“I recently returned from duty fighting the Taliban in Afghanistan to find that judges at Darlington county court had granted my wife a non-molestation and an occupation order of the marital home, this was all done ex parte in my absence whilst serving Queen and country overseas.”


“My wife has since moved her new lover in and has been denying contact to our 2 young children.”


“If this is how the courts treat a serving soldier based on a false allegation, imagine how they could treat you.”
“All my wife needed was to say there was a ‘perceived fear’ of what I may do when I found out about her affair, the judge said because I was a soldier I was ’obviously violent’ he then granted her an occupation order and has denied me going within a mile of our home.”


“I’d prefer to be fighting the Taliban than fighting the legal system, they operate in secret behind closed doors and the judges remain unaccountable for their actions.”


“I’ve already seen a Cafcass officer who has told me I’m looking at an occasional hour with my kids in a supervised contact centre, probably for at least the next 6 months.”


“Due to the sheer frustration and the delays in dealing with my case, I feel I have no other option but to protest in this way, so I decided to give the Judges a taste of their own medicine and ‘deny access’ to their court.”


“Perhaps while they are waiting for the chains to be cut, they might reflect on the damage they have done to my children in denying them contact with their father.”


“We spend billions of pounds fighting the Taliban; they have killed hundreds of my colleagues.” 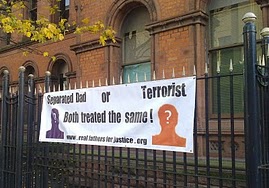 “The family courts are responsible for at least as many deaths through fathers deprived of hope, taking their own lives, yet we actually support them through our taxes”

He was quite upset, but went on to say;

“The Taliban sneak about and plant I.E.D's  (improvised explosive devices)  in the cover of darkness. These bombs not only kill soldiers but maim and kill children. I would say that family courts are just like the Taliban.”
“I left my family to serve my country, and to help other families live a life of freedom in Afghanistan.”

“My children have been maimed for life, just for like those children in Afghanistan that are caught in I.E.D explosions. They may not have lost limbs or have scars, but they have lost a father who loves them .“

Notes to Editor:
Real father for justice (Rffj) is a breakaway group from Fathers 4 justice and was formed in June 2005.


Rffj last hit the North East headlines on father’s day 2008, when Simon Anderton spent 3 days protesting on the Tyne Bridge Newcastle, after spending 4 days incarcerated for the peaceful protest he was later cleared of any wrong doing by a jury in Newcastle crown court.


Rffj campaign for accountability and transparency in family law, for the rights of a child to have a loving and meaningful relationship with both parents post divorce or separation.
Contact Mike Kelly on 07782 440072 or email info@realfathersforjustice.org