The agony of child support

Your Monday editorial "Anti-Dad bias," is the first substantial challenge to the divorce industry by a major newspaper and deserves to be pursued much further. This abuse of power goes far beyond media bias. The child support machinery has been expanded and perverted from a means of providing for abandoned children into a huge federal subsidy of divorce and single parent homes. It also distorts public policy and criminalizes innocent parents.

Ostensibly created to recover welfare costs, child support enforcement on the federal level has failed and now costs taxpayers more than $3 billion annually. More seriously, it pays mothers to divorce or forgo marriage, thus creating the very problem it is supposed to alleviate.

One way to encourage fatherlessness is to set child support at onerous levels. Economists Robert and Cynthia McNeely write that increasingly punitive awards have "led to the destruction of families by creating financial incentives to divorce." This criminalizes innocent fathers with burdens that are impossible to pay, and it creates yet another federal plainclothes police force with no constitutional authority. The "deadbeat dad" is far less likely to have voluntarily abandoned offspring he callously sired than to be an involuntarily divorced father who has been, as attorney Jed Abraham put it, "forced to finance the filching of his own children."

These programs are virtually unassailable, not only because they balance state budgets, but because even family-values conservatives are reluctant to challenge destructive policies for fear of incurring feminist charges of defending "deadbeat dads."

The child support deception offers a preview of where our entire system of welfare-state funding may be headed: expropriating citizens with destructive programs that create the need for more spending and taxation. It cannot end anywhere but in the further decline of the family and criminalization of more of the population.

Now Lifetime TV, a network known for its movies about women being endangered by men, has sunk to a new low - a reality program called "Deadbeat Dads."

In the beginning of gotcha TV, viewers enjoyed watching the police bust down a door and haul away the bad guy on a show like "Cops." That same format migrated over to Animal Planet, where the cops bust down the door and arrest the man who has been starving his dogs or kicking his cats. Now Lifetime is doing the same thing to divorced fathers.

Lifetime TV's new reality show, "Deadbeat Dads," centers around National Child Support founder Jim Durham, who finds and confronts dads who do not pay their child support. Reuters news agency reports that Mr. Durham "functions as sort of a 'Dog the Bounty Hunter' for tracking deadbeats ... it's ambush reality TV." However, the reality show, originally developed at Fox as "Bad Dads" and later dropped, is Lifetime's attempt to take cheap shots at men while ignoring the damage the show can cause children, wives and other family members.

The Lifetime TV program ignores the numbers. More than 90 percent of fathers with joint custody paid the support due, according to a Census Bureau report (Series P-23, No. 173). So deadbeats are in the minority. Also, most so-called deadbeat dads actually are dead broke. Two-thirds of men who fail to make child-support payments earn poverty-level wages, according to the Federal Office of Child Support Enforcement. Most of the others are unemployed.

Bruce Walker, executive coordinator at the District Attorneys Council in Oklahoma City, who ran the state's child-support enforcement program for three years and jailed hundreds of fathers for nonpayment, told the Newark Star-Ledger in 2002: "These men are seldom the mythical monsters described by politicians."

"Many times I prosecuted impoverished men," he told the Star-Ledger. "I prosecuted one deadbeat dad who had been hospitalized for malnutrition and another who lived in the bed of a pickup truck."

Nor is it likely that Lifetime will ever show that some fathers simply give money directly to their teenage children because some mothers end up using child-support payments for everything but the child.

But what about divorced moms who do not allow the father to visit his children, despite court orders allowing him to do so? Another study, "Visitational Interference: A National Study" by J. Annette Vanini and Edward Nichols, found that 77 percent of noncustodial fathers are not able to spend time with their children, as ordered by the court, as a result of "visitation interference" perpetuated by the custodial parent. This would mean that noncompliance with court-ordered visitation is three times the problem of noncompliance with court-ordered child support. In short, lousy moms outnumber deadbeat dads 3-1.

Will Lifetime TV be truthful about how often some mothers end a relationship with the father, take custody of the children and refuse to allow the father access to the children? Indeed, after the age of 40, women initiate more divorces than men.

While sometimes it seems that Lifetime has an anti-male agenda, perhaps it is simply pandering to embittered moms who make up the network's audience. The full tragedy of the collapse of many American families remains untold. It is a worthy subject, but it must be told without ideology; it must be clear-eyed about the myriad ways men and women have failed each other. Such radical honesty would make for compelling television and would be a public service. Pity Lifetime is not daring enough to try it.

Posted by Michael J. Murphy at 10:00 PM No comments: Links to this post

Simon Anderton, 49, climbed to the top of the iconic Newcastle bridge in the early hours of Father's Day on June 15 last year, before tying a 12kg dummy with its head in a noose from the arch of the bridge.

He spent two days on the bridge before being talked down by police negotiators.

He was arrested and charged with attempting to cause a public nuisance and causing a danger to road users.

At the start of his trial at Newcastle Crown Court, Carl Gumsley, prosecuting, said Anderton was an activist member of the real Fathers for Justice and carried out the stunt to highlight the "failures in inequities" in the family court system.

Mr Gumsley said Anderton was aiming to create massive public disruption and wanted to close the bridge to get his message across.

"The Tyne Bridge is one of the most iconic and recognisable symbols in the north east," said Mr Gumsley.

"But it is much more than that, it is one of the main roads across the Tyne.

"The prosecution don't suggest that Simon Anderton doesn't believe in his cause. Everything suggests he believes in it passionately.

"But this is not what this case is about.

"This case does not seek and does not want to examine the merits of his cause.

"His actions are on trial, not his beliefs.

"This case is brought because in seeking to establish his cause this defendant acted in a way which created what must have been an obvious danger to other road users."

Anderton, from Melbon Terrace, Heaton, Newcastle, denies the charges against him and the trial continues.
The full article contains 301 words and appears in n/a newspaper.
Page 1 of 1

A FATHERS’ rights campaigner risked the lives of drivers and pedestrians during a 62-hour-stand off on top of the Tyne bride, a jury heard today.

The 49-year-old, who described himself as an activist with the Real Fathers For Justice group, had hoped to cause massive disruption by closing the bridge, Newcastle Crown Court was told.

Instead, police took the "difficult" decision to keep it open to traffic but not pedestrians, the court heard.

Anderton warned an expert police negotiator he would step up his protest unless the bridge was closed, it was claimed.

And he hung a mannequin from the structure in a chilling mock suicide, the jury heard.

"In seeking to establish his cause, in seeking to publicise what he personally thought was the right thing, he sought, attempted and intended to affect so many others," said Carl Gumsley, prosecuting.

"In doing so, his actions created what must have been an obvious danger to any body else by hanging that mannequin over the road."

When Anderton, from Meldon Terrace, Heaton, Newcastle, finally came down the mannequin was weighed at 12.5 kilos, the court heard.

"Were it to have fallen it would have been travelling in the region of 40 to 45mph when it may have well have hit either a pedestrian or car crossing," Mr Gumsley said.

"Hanging that mannequin would, quite obviously to a reasonable person, constitute and create a danger."

Anderton denies attempting to cause a public nuisance by disrupting traffic on the bridge and causing a danger to road users.

During interviews after his arrest, he told police he had scaled the bridge to make a point and claimed the family court system and not him was to blame for any disruption.

But Mr Gumsley told the jury: "This case does not seek and does not want to examine the merits or otherwise of his cause. His actions are what are on trial."

Anderton had begun his protests at 5am on Father’s Day, climbing on to the top of the bridge.

"His attempt was to have the bridge closed and cause massive disruption to the public," Mr Gumsley said.

Posted by Michael J. Murphy at 9:25 PM No comments: Links to this post

Whipped: A magazine for married men 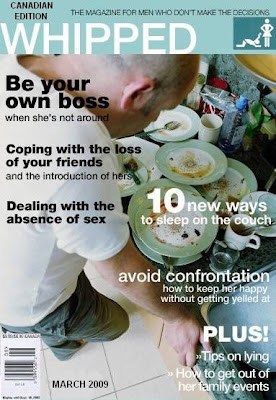 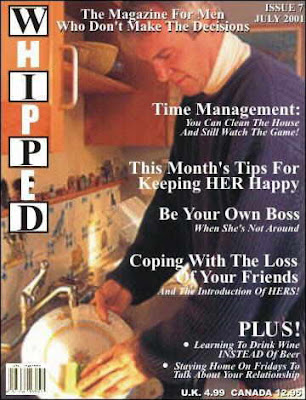 Posted by Michael J. Murphy at 3:02 PM No comments: Links to this post