The following is a report on the staging of the protest today on the very high, very busy and very famous Lions Gate Bridge allowing traffic to cross over from the City of Vancouver to North Vancouver.
This brief summary is courtesy of Wikipedia. 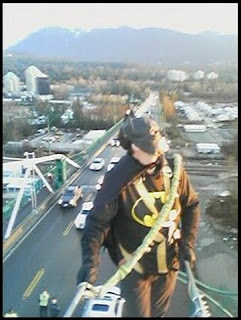 The Lions Gate Bridge, officially known as the First Narrows Bridge,[1] is a suspension bridge that crosses the first narrows of Burrard Inlet and connects the City of Vancouver, British Columbia, to the North Shore municipalities of the District of North Vancouver, the City of North Vancouver, and West Vancouver. The term "Lions Gate" reflects the Lions, a pair of mountain peaks north of Vancouver.
The total length of the bridge including the north viaduct is 1,823 metres (5,890 feet). The length including approach spans is 1,517.3 m (4,978 ft), the main span alone is 473 m (1,550 ft), the tower height is 111 m (364 ft), and it has a ship's clearance of 61 m (200 ft). 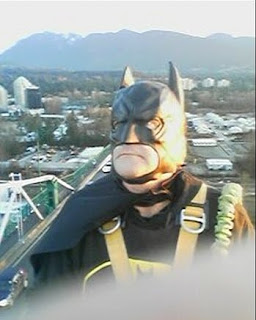 Prospect Point in Stanley Park offered a good high south end to the bridge, but the low flat delta land to the north required construction of the extensive North Viaduct.
The bridge has three reversible lanes, the use of which is indicated by signals. The centre lane changes direction to accommodate for traffic patterns. The traffic volume on the bridge is 60,000 - 70,000 vehicles per day. Trucks exceeding 13 tonnes (14.3 tons) are prohibited, as are vehicles using studded tires. The bridge forms part of Highways 99 and 1A.
On 24 March 2005, the Lions Gate Bridge was designated a National Historic Site of Canada.[2]

Greetings liberators from a very tired Batman.
This morning at 5:00 am the Burnaby Batman and Robin QC scaled the Lions Gate Bridge (Olympic Route) in West Vancouver BC in support of not only the cause we hold dear but in support of our Olympic athletes as well. 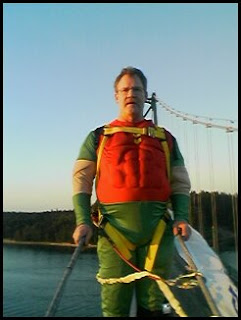 The BC Hulk also was on scene and chained himself to the bridge deck while our superheroes placed their banner and Canadian flags high upon the structure. Within minutes of our superheroes being aloft the authorities converged upon the bridge in great numbers.


At one point from my lofty perch I counted 12 police vehicles on the bridge deck and another 7 at the foot of the bridge on the north side. Amazingly they left the bridge open and only shut down the middle lane. Our photographer who was on scene was quickly arrested and taken into custody. The BC Hulk was able to remain chained to the bridge deck for just over an hour before authorities were able to cut him loose from his chains. 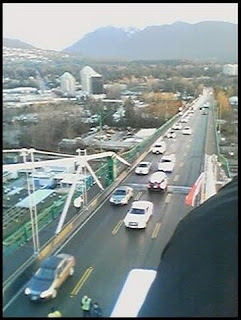 Batman and Robin remained upon the bridge structure high above authorities for 4 hours before being talked down. Upon our descent to the ground below media was allowed to move in to capture the pictures and footage. We saw several TV cameras on scene as well as many journalists with cameras.
My understanding is we have already been all over the news this morning and on almost every radio station out here. The 4 of us were all taken into custody, charged with mischief and have our first court appearance on March 10, 2010 in North Vancouver BC. We were held in custody for several hours and released with promises to appear. 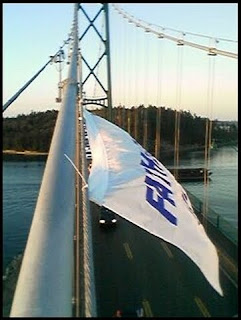 The photos that were taken as I discovered were no good as it was to dark, the video footage shot during execution of the stunt was also not useable do to the darkness. As such the only pictures I have at this time were the ones shot with Robins cell phone upon our lofty perch. (ed note those in the story) I have included a couple of them with this message and will provide more as it is made available to me. As such anyone who is able to record any footage from the news stations and or newspaper articles from the same is encouraged to get them to me ASAP.
Best Wishes all and more updates will be forth coming after I am well rested.
Together we will change the world.


Video of Bridge Protest and Arrest

By Staff Reporter, The ProvinceFebruary 17, 2010

Two men dressed as Batman and Robin stand on the cabled supports of the Lions Gate Bridge during a protest early Wednesday.

Four men are facing mischief charges after two "superheroes" climbed onto the cable supports of the Lions Gate Bridge, disrupting morning rush-hour traffic on Wednesday.
Two men dressed in Batman and Robin costumes, claiming to represent Fathers 4 Justice, secured themselves atop the cables shortly after 5:30 a.m.
Two other men involved in the protest were arrested on the bridge deck as police closed the centre lane to traffic.
Despite keeping two lanes open during the nearly three hours the men stayed over the bridge deck, southbound traffic was badly congested through the morning rush.
The men climbed down on their own around 8:30 a.m. and the bridge was fully reopened.
West Vancouver police are recommending mischief charges against a 59-year-old Surrey man and three men from New Westminster aged 37, 46 and 54. They were released on a promise to appear, with conditions, and are due back in court on March 10.
© Copyright (c) The Province
http://www.theprovince.com/Fathers+Justice+superheroes+force+lane+closure+Lions+Gate+Bridge/2575814/story.html

Posted by Michael J. Murphy at 7:48 PM No comments: Links to this post