I wonder what the law suits do to the budgets of these incompetent child protection agencies who are whining to the Provincial Government about not having enough money.MJM. 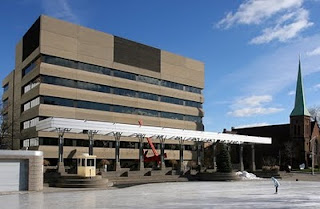 The Windsor-Essex Children's Aid Society has been slapped with yet another lawsuit related to allegations that a foster mother had a sexual relationship with a 14-year-old boy placed in her care.


WINDSOR, Ont. — The Windsor-Essex Children's Aid Society has been slapped with yet another lawsuit related to allegations that a foster mother had a sexual relationship with a 14-year-old boy placed in her care.

The boy's biological father is suing both the society and the foster parents for $150,000, plus any "punitive and aggravated damages" the court deems just.

His lawsuit, yet to be served on the defendants Friday, comes after criminal charges against the foster mother and a civil suit by the boy's biological mother were made public by the Windsor Star.

In his statement of claim, the man says he has lost the "opportunity to experience a normal father and son relationship" because of the "reprehensible" conduct of the foster parents and the CAS.

According to the nearly identical statements of claim filed earlier by the boy's biological mother, the boy was placed with the CAS in 2008 following the suicide of his sister. The boy's mother said she was in a "fragile" emotional state at the time and CAS staff convinced her it would be in her son's best interest to go into foster care. She signed a temporary care agreement voluntarily giving custody of her son to the CAS.

The biological father, in his statement of claim, says he was in a similarly fragile state at the time, having been severely injured in a car crash.

The biological parents had been common-law spouses but were no longer together at the time. The father had joint custody of the boy and maintained a "close relationship with the child," said his lawyer, Enzo DiGioia.

The parents cannot be named to protect the boy's identity.

The foster mother, 46, is before the criminal courts charged with sexual assault and sexual interference. According to a statement of defence filed by her husband, she was having sex with the 14-year-old boy placed in their home in October 2008. The husband said he was unaware of this until he caught his wife and the boy in a sexual act in February 2009. He said he took immediate steps to keep his wife and the boy apart and turned in his wife to authorities.

It appears from court documents that the foster parents are no longer living together.

The foster father is being sued on the basis that he ought to have known his wife was sexually abusing the boy.

The biological father's lawsuit repeats the allegation that the foster parents introduced his son to drugs, a claim the foster father denies in his statement of defence to the biological mother's suit.

The biological father also repeats the claim that, while his son was in foster care, he voiced concerns to the CAS but its workers failed to act.

No court dates have been set in the civil lawsuits. A preliminary hearing for the foster mother is set for June.
© Copyright (c) Canwest News Service
http://www.windsorstar.com/news/Second+suit+filed+foster+assault+case/2974018/story.html
Posted by Michael J. Murphy at 7:27 PM No comments: